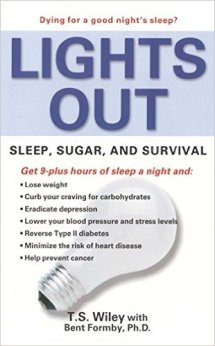 Although most areas of my life as are healthy as they could possibly be, sleep has seriously let me down over the last few years. This was what lead me to read Lights Out. That and the fact that I have suffered from numerous bouts of pneumonia/chest infections over the last year, and I had a sneaking suspicion that my lack of quality sleep may be partly to blame.

First up I will say that Lights Out is relatively old (published 2001) and that there has no doubt been a great deal of new research done on the topics discussed in the intervening period. Also the style of writing is extremely sensationalist. Chapters conclude in a style not unlike that of The Divinci Code writer Dan Brown, and I could almost hear dramatic music and the end of each chapter.

That said, I thought this was a really interesting read. It blames a huge number of western society’s chronic and increasing diseases (such as obesity, diabetes, cancer and heart disease) on the invention of the light bulb. It documents compelling research that shows a steady increase in these conditions as light bulbs became more readily available.

This makes sense. As light bulbs became more widely used our days grew longer. We could work more hours than ever before, businesses such as factories suddenly needed night workers and as a result our sleep patterns became messed up like never before.

Now we have the ability to stay awake longer, we of course need more fuel in order to do so. Yet more compelling research showed that we fuel these extra waking hours with carbs (aka sugar). As a species we evolved on minimal seasonal carbs; a handful of blueberries when we stumbled across a ripe bush, a few apples at the start of autumn. Research shows we can get by without any carbs at all, and many people (myself included) find they feel and function better on low carb or ketogenic diets. The combination of less sleep and more sugar we live on nowadays is quite simply deadly.

The book suggests that we do as much as we possibly can to ensure we get at least nine hours of sleep a night, particularly in winter months, during which our ancestors would have slept whenever the sun wasn’t up. Our rooms should represent caves at nighttime. Blackout blinds should be installed, and no lights should be visible, including “stand-by” lights on electrical items, or digital clocks. We should also not look at screens or consume carbs for a good few hours before bedtime.

I finished this book a good month ago and since have tried to implement as many of these suggestions as possible. Given that prior to this I clocked in an average of about 5.5/6 hours of sleep a night, I felt that nine hours was an extremely tall order.

I gave it my best shot however, and now I do manage to get nine hours of rest several times a week, something I literally never thought I could do. Several nights of the week I teach exercise classes, and on these nights I tend to get to sleep later than I would like, but on the other evenings I try my best to go to sleep by about 9pm.

This of course has its disadvantages. The hubby and I get less time together, which is annoying, and I get less time to myself, which I can only get when the kids are in bed. As I now go to bed only about an hour or so after them, time to read or watch TV is very limited. Also socialising becomes tricky. Either I have to leave really early, or I sacrifice my sleep time and feel rubbish the next day.

Getting to sleep is never a challenge for me, but staying asleep proves difficult every night. I now have various relaxation tracks and apps (including the fabulous Headspace app) that I use to help relax me when I wake early. Even if they don’t enable me to get back to sleep, they at least lower my heart rate so much that my FitBit “thinks” I’m asleep, which I reckon means I’m getting sufficient rest time. I used to use my early wake-up time to work, catch up on emails or to exercise, so there is no doubt that my new technique is far better for me, even if I don’t actually manage to get back to sleep.

The first few times I clocked nine hours sleep I actually felt worse for it. I felt spaced out and not unlike being hung-over. I guess it was so alien to my body that it didn’t quite know how to manage it. Scientifically I suppose my endocrine system was flooded with hormones in levels it was simply not used to. I no longer get this feeling though, and I certainly feel more with-it than I have for a long time. I also no longer fall asleep in front of the TV, as I’m in bed long before I’m tired enough to do that.

I’ve become better at giving in to my body’s cries for sleep, as I realise just how important it is, and how unnatural it is to fight sleep. I now think of quality sleep as important as decent gym sessions, which certainly helps me prioritise my sleep. This is something I never used to do. In fact at busy times sleep was always the first thing to go, as I just didn’t realise quite how important it was.

Time and again when I hear or read about today’s biggest health hurdles, sleep is mentioned. I’ve even heard a PT say that unless his clients were willing to put the sleep hours in, he simply refused to work with them. I whole-heartedly agree with this now. Sleep is more important to your health then anything you could do in the gym.

This book has most definitely changed my life. I would recommend it to anyone, not only those who have a particular sleep issue. In fact it’s probably more beneficial to those who don’t think they have a problem with sleep but who only clock about six or seven hours a night. At least those who struggle with sleep know they have to do something about it.

Lights Out is worth anybody reading, so long as you don’t stay up reading it into the wee small hours of the night.